Born in Ipswich in 1894, Cecil Bert was known simply as Bert.  His Father Albert, who was a brother of my Great x 2 Grandfather, had been born in Hemingford Grey and moved his young family to Ipswich.  His success as an Insurance agent had allowed him to move away from farm labouring and run his own household, even employing domestic staff.   Bert was the eldest of six children but his younger brother Rowland and twins Winifred and Roberts all died in 1902 due to an outbreak of diphtheria.  His sister Constance was a year younger than him and Ivy Primrose was born when he was entering his teens.  Bert joined the scouts where he enjoyed going on camp and learned to play the bugle.  He was also a proficient boxer and made a few public appearances.  He joined up as a Territorial just before the war started. He enlisted in the 1st East Anglian Field Ambulance, Royal Army Medical Corp, on the 5th June 1914. In August 1914 he stationed at Long Melford and by March 1915 he was serving with the 88th Field Ambulance and training around Stoneleigh Park in Warwickshire, Leamington Spa and Coventry. 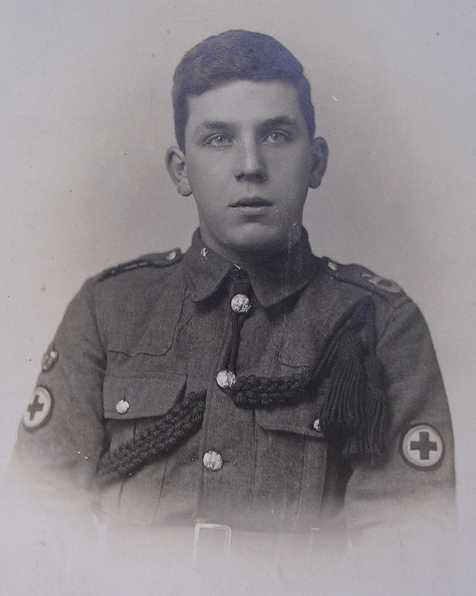 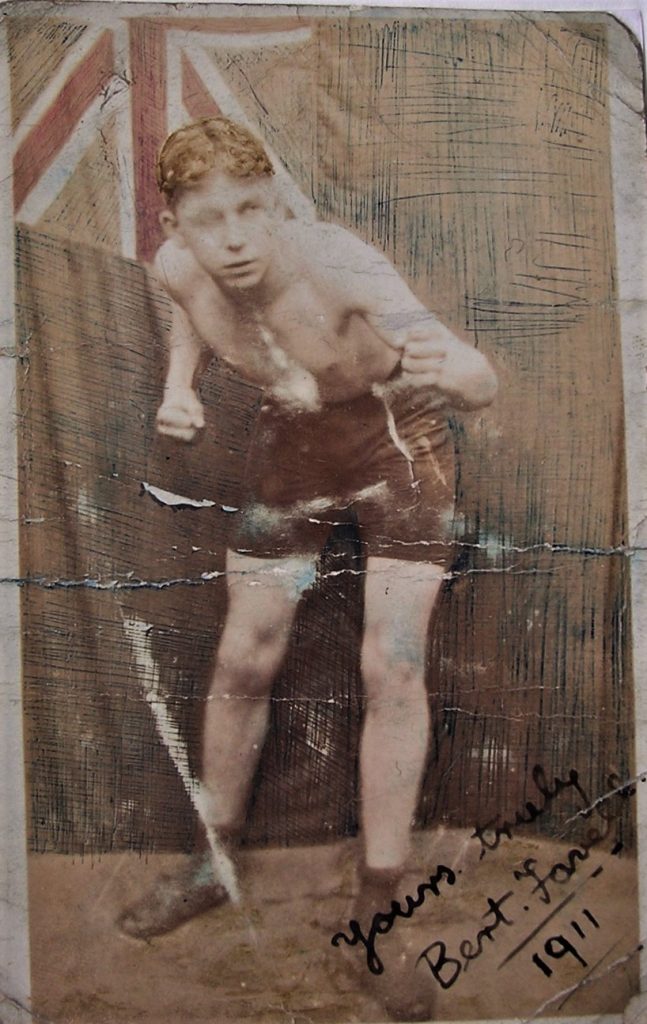 During his service he sent home letters, photographs and postcards.  The photos are mostly addressed to youngest sister Ivy Primrose and record his travels.  It was while he was away on service that his Father suddenly left home, leaving his wife and daughter to fend for themselves.  Something he was never really forgiven for.  The reason is not known, but is is thought that he had lent a large sum of money to a friend who had then defaulted on the loan.  One of Bert’s letters asks if ‘Dad got his money back’.  My own Grandfather believed that Albert had lost a large sum gambling and his very strict wife had thrown him out of the house, throwing the china at him as he left.   Albert went off to London to live with his cousins in Camden Town and never returned to Ipswich, leaving young Bert to try to finance his mother and young Sister on his army pay.

Bert first saw action as an Ambulance driver as a part of of the sea-borne invasion force that landed at Suvla Bay, Gallipoli, Turkey on 25th April 1915.  A letter home to his Mother describes his first days there.  “We had to land on the enemies country so you can guess it was not all honey we were under fire & had to get into the water past our knees but all landed safe & are all safe as yet.  Yesterday being about the first lull in the fighting our Major General came round & personally congratulated and thanked us on the splendid work we have done he said we might write home and tell our people he had been round.  We are being shelled continuously.  I have to keep ducking down into the trench as we sleep in trenches and we are now digging trenches 5ft deep so you can guess it is a nice job writing letters.”

He goes on to talk about news of some friends and how he would appreciate a cake being sent out to him but finishes with “Now I must close as it is my turn to go digging.  Remember me to all, Best love from your Son Bert.”  Bert would have taken part in the remarkable evacuation when it was realised that the toe- hold gained against the Turks could not be held.  Supplies and reinforcements could not be provided in sufficient numbers for the ANZAC and British troops to break out and they faced appalling conditions as they clung to the beach-heads while under heavy fire. Even the weather was against them and those making it inland found themselves bogged down in thick mud 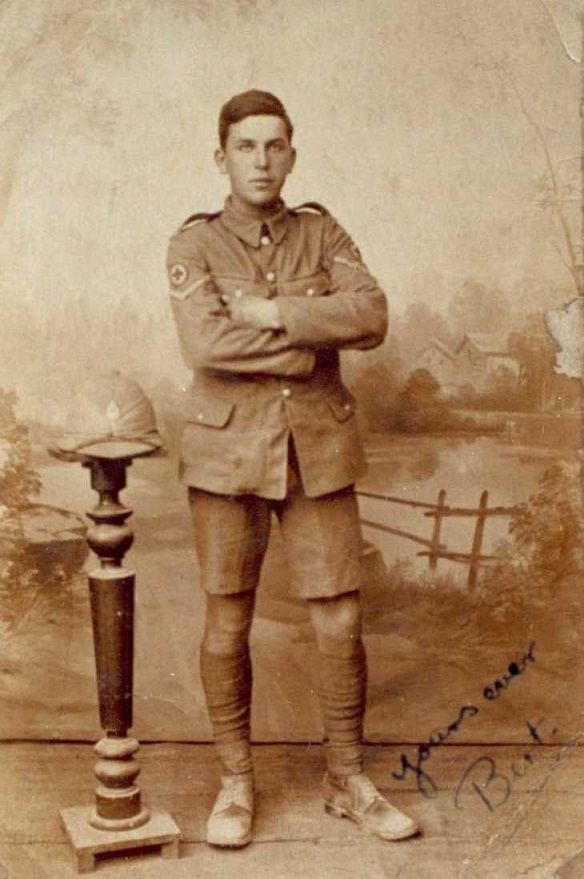 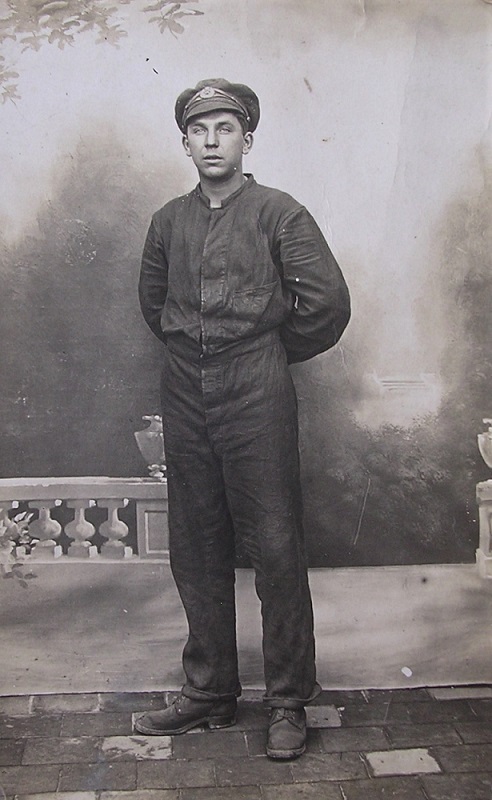 After the evacuation from Suvla Bay, Bert spent a year under canvas at Salonika before being sent to France where he served in the Ypres and Somme areas.  He was transferred to the Royal Engineers due to some earlier electrical training and became 236466  Sapper Favell with the 353rd Electrical and Mechanical Company, Royal Engineers.  The photographs show a different Bert from the fresh faced recruit at the start of the war.  Among the souvenirs he brought home is an improvised ‘Crown & Anchor’ board, hand painted onto stiff army canvas and a large leather shaker for the ‘put and take’ dice.  Strictly illegal, the gambling games would be hastily set up and just as quickly cleared away should anyone in authority show up.  It is likely that Bert ran his own games!  Another souvenir was known as the Ypres knocker.  Literally just that – a large brass door knocker, bowed out of shape, probably by shell-fire that he is reputed to have salvaged from a building in the devastated Town of Ypres.  He went on to be in charge of a mobile electrical generating station and after the war worked for his local electrical generating board.  His own souvenir cigarette case, probably engraved especially lists his units movements and includes Gallipoli, Somme, Ypres, Arras, Cambai. Loos, Bailleul, Menin Road and Cologne.,   He was demobilised’ on the 31st January 1919 and in 1920 married his sweetheart Edith Scrivener.  Bert died in 1967.  His daughter Christine was a well known teacher in Felixstowe, Suffolk and I am grateful to her for all of the information and photographs that she passed down.