Sergeant george favell of the 31st regiment of foot

The 31st Foot was an infantry regiment originally raised in 1702 and was also known as the Huntingdonshire Regiment.  George’s life took a very different direction to that of his siblings. 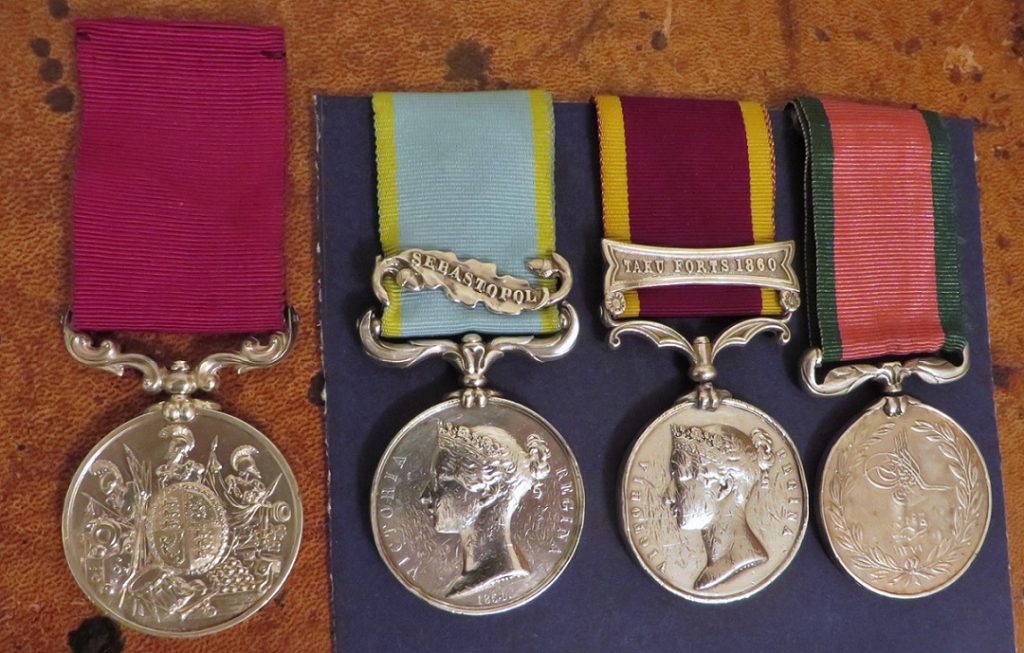 George was born in Hemingford Grey in 1832.  His Father was John Favell and his younger brother Stephen was my Great x3 Grandfather. The census taken in 1841 lists him at the age of nine years, living with his parents and five brothers and sisters in the High Street, Hemingford Grey.  By the time of the next census in 1851 his Father had died and George had moved out of the family home and along with an older brother William, was lodging with his maternal Grandmother and an Aunt.  His widowed Mother was left with a further eight children still living at home, ranging in age between two and twenty years old.  George and William were both employed as agricultural Labourers, as were a further two brothers, Thomas (aged 20) and Stephen (age 16) who were still living at home.  A younger sister Sarah (age 15) was working as a Servant, while the remaining five children were all of school age or younger.  George and the other children that were working probably all had to contribute to help feed and clothe the younger members of the family, and the elder children moving out into lodgings was probably a practical arrangement simply for reasons of space.  Little wonder then that the smartly dressed recruiting Sergeant and his party were able to entice the young George to accept the Kings Shilling with the promise of a smart uniform, food, clothing, travel and an opportunity to escape from the hardships of life in a small farming village.  He enlisted in the 31st Foot at Hemingford Abbots on the 13th February 1852 at the age of 17 years and 10 months.

By 1855 the 31st were stationed at Corfu, shortly before the outbreak of the Crimean War and were reinforced before embarking for Balaclava.  The conflict in the Crimea was caused by friction between the Russians and the Ottoman Empire and France in the Middle East.  Britain France and Turkey fought as Allies against the Russians.  Lessons learned by Wellington’s army during the Napoleonic Peninsula war nearly forty years earlier had all but been forgotten.  The army had been neglected by the politicians for years and starved of funds.  The army that landed in the Crimea landed wearing the same uniforms that they wore on the parade grounds and were not equipped with the clothing, tents or supplies needed to cope with the severe winter they were facing.   Thousands of troops died from the cold and from disease and as a result Florence Nightingales work came to the fore, and many of the service corps supporting the army’s logistics and supplies had to be developed.  The 31st took part in the assault on Sebastopol.

After the Crimea, the 31st were assigned to the Maltese island of Gozo before moving on to King Williams Town on the Cape of Good Hope where George’s service record shows he stayed for 4 months.   It was in April 1857 that George was awarded his first good conduct pay of 1 1/2d a day.  In 1859 the regiment was moved to Poona in India and readied for active service in China and again reference to George’s service record shows that he was stationed in the East Indies for 1 year and 4 months.  It was on the 25th December 1859 that he was promoted to the rank of Corporal and by April 1860 his good conduct pay was increased to 2 1/2d a day.  When the Mandarins broke the Treaty of Tienstin in 1860 the British armies moved into China and arrived at the Peiho river and commenced the 2nd Opium War.  The Taku forts were the main objective and were taken on the 21st August and a truce was called on the 24th October.  The 31st became part of the new garrison at Tienstin and remained there for over 3 years, not returning until 1863.  While in China, George was promoted to the rank of Sergeant.

His 10-year service was completed in 1862 but rather than claim his discharge he promptly signed on for another 11 years.  When George returned to England, he possessed medals awarded for his part in the Crimean war and China campaign.  He was awarded a clasps for ‘Sebastopol’ and ‘Taku forts’.  He also had a foreign award, the Turkish Crimean Medal, awarded by the Turkish Emperor to the allied armies.  Shortly after his re-engagement things took a turn for the worse for George.  Maybe he had second thoughts about re-enlisting or maybe he over celebrated in some way, but on 1st December 1863 he was tried and impeached by Court Marshal for absence.  Two days were discounted from his service for 1st and 2nd of December and are excluded from counting towards his service or his pension.  Possibly he was sentenced to 2 days in the ‘Glass House’ or some other form of punishment.  He was stripped of his Sergeant’s rank and returned to the rank of Private, loosing his good conduct pay into the bargain, although he did manage to get his back within a year.

George returned to his old home while on leave in England and at the age of 33 was married to 21 years old Sarah Lavender at Hemingford Abbots on the 28th September 1865.  In the register entry his profession is given as soldier and place of residence as Aldershot.  George’s wife may have been allowed onto the strength of the regiment as she appears to have travelled with him to overseas postings, judging by the locations given for the births of their children.  In December 1866 George’s good conduct pay was increased and in the following year George and Sarah’s first daughter was born in Malta.  In October of the same year George was promoted to Corporal, for the second time in his career.  A son was born in 1870, again in Malta and the same year his pay for good conduct reached the level of 4d a day. In 1872, on the 30th March, George regained the rank of Sergeant.  A further son was born in 1873, but this time the place of birth was Gibraltar where George’s second term of service came to an end after a total of 21 years service.  The family returned to England where he was discharged at Netley, beside Southampton Water.

George left the 31st at the age of 39 years and 1 month.  His description at the time shows him to be 5 feet 6 inches tall with a fresh complexion, blue eyes and dark brown hair.  The notes show he had several decayed teeth, the veins of his left leg were enlarged and he had “VS” tattooed on his right arm.  His trade was still regarded as ‘Labourer’ and his intended place of residence was Huntingdon.  He also left the army with a Long service and Good conduct medal to add to his three campaign medals.  The “VS” tattoo is a bit of a mystery, but might stand for Valiant Stormer which was associated with the “Forlorn Hope”.  These were the initial shock troops used in the storming of defences who stood little chance of survival and were either volunteers or sometimes conscripted criminals with a chance of winning freedom.  Was George one of the initial stormers at Sebastopol or was the tattoo just a bit of bravado?  Another four children were born in Hemingford Abbots and St Ives in Huntingdonshire between the years of 1876 and 1884.  In the 1881 census George is listed as living in St Ives and his occupation is given as Pensioner Servant.  At the 1901 census he was still living in St Ives and listed as an Army Pensioner 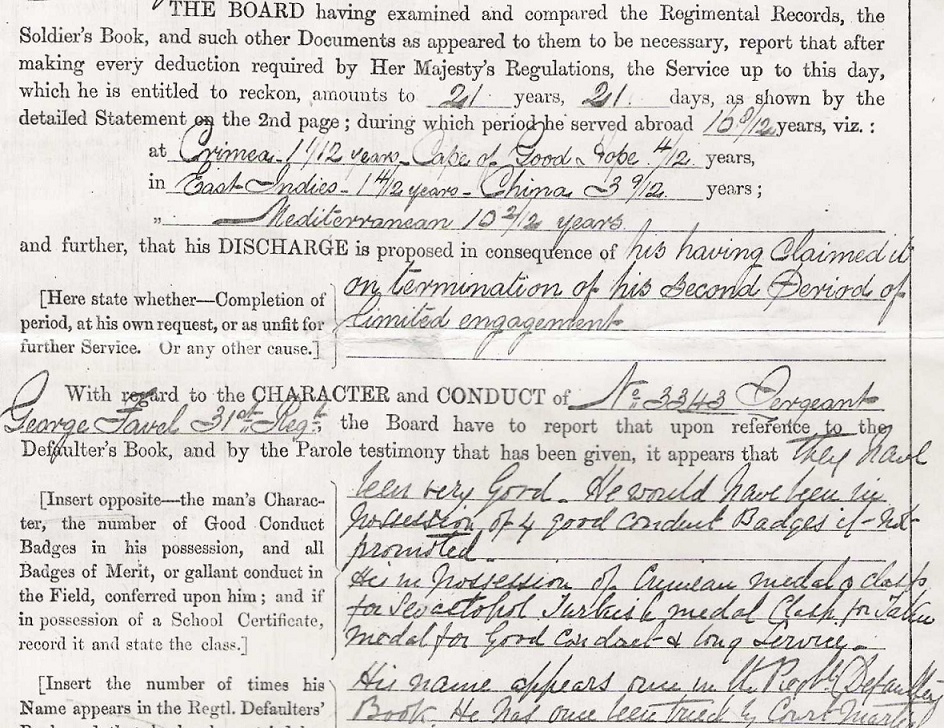 In late 1901 The Cambridge Independent Press carried the following report: –

Death of Sergeant George Favell – A well-known figure in St Ives passed away on Wednesday last, viz,, Sergeant George Favell, who had been in the army upwards of 21 years.  The Sergeant had served in many engagements amongst which were the Crimean War and storming of Sebastopol, the capture and recapture of Kadin, the war in the North of China &c.  He was the possessor of quite a large number of medals and clasps &c, and, when he retired from the army, his fellow sergeants presented him with a watch and an Albert and locket.  The deceased was 68 years of age and leaves a widow and 7 children to mourn his loss.

His campaign medals came up for auction in 2003 along with a copy of his service record which formed the basis of most of this research.  Alas his Long Service and Good Conduct medal was missing and must have become separated from the group, perhaps some effects being distributed amongst his children.  Perhaps being awarded towards the end of his service, the missing medal had not been worn on duty like the others.  By pure chance in 2019 it was spotted for sale with a major medal dealer in the UK, having previously been through auction with a job lot of similar medals in New York.  It was fantastic to be able to reunite it with the rest of the group.  Its condition does suggest it was not worn on parade for many years like the others.