More unusually there is also a commemoration in St Clements Church (now redundant), in Star Lane, Ipswich, Suffolk. “In memory of Lieut Commander E T Favell RN and the men of HMS Pathfinder many of whom were known and loved here and who gave their lives for their country on Sept 5th 1914”.

A picture of Lieutenant Commander Favell appears in the 10th October 1914 edition of ‘The War Illustrated’ on the Roll of Honour page for those Killed on Land and Lost at Sea.

Ernest died on the first ship ever to have been sunk with a torpedo fired from a submarine, leading to some confusion at the time that a mine has been responsible.

Launched in 1904, the Pathfinder displaced 2,940 tons, had a speed of 25 knots and was armed with nine inch guns. In the first demonstration of the deadly potential of the German U boat, the light cruiser “Pathfinder” was torpedoed in the Firth of Forth on a calm sunlit day. She sank in minutes with a heavy loss of life.

The standard history “The Great War”, edited by H.W.Wilson details the event: –
“The British scout Pathfinder, Captain F.M. Leake, was cruising about 15 miles off St Abb’s Head, at the mouth of the Firth of Forth, when an explosion suddenly took place under the forebridge. It was soon after four in the afternoon that she was sunk, for most of the company were below at tea, and four is the tea-time of the Navy. No one on board had noted any sign of danger. The first indication that submarines were at hand was the apparition of two periscopes in the water not far from the ship.

It does not appear to have been ascertained whether the periscopes belonged to one and the same submarine, or to two different vessels. When the periscopes were sighted, the Pathfinder, according to one of the crew, at once began to turn towards them. As the turn began she was struck amidships by a torpedo, which seems to have exploded her forward magazine. The vessel quivered from end to end, enveloped in dense black smoke and lurid flame. Masses of wreckage fell on the officers and men who were on deck, killing many outright. Others were flung stunned and bleeding upon the deck, or hurled against bulkheads and gun-shields.

The shattered wreck instantly began to sink. But there was no panic. British seamanship, trained for long years to discipline and order in all conceivable circumstances, rose to the occasion. In the simple words of one of the survivors: “We waited for orders.” Those orders came, for there were a few officers left. The boats had been smashed by the explosion, but the men speedily heaved overboard booms, gratings, furniture, and everything that would float. The bows of the
ship sank deeper and ever deeper into the water, and the last order came: “Every man for himself.”

A seaman who escaped gave this account of his experiences: “I saw a flash, and the ship seemed to lift right out of the water. Down came the mast and fore- funnel and forwards part of the ship. All the men there must have been blown to atoms. I bobbed down for a few seconds for fear of being hit by the debris – some pieces of it must have weighed nearly a hundred weight – which was blown sky high. I scrambled to the quarter-deck, which was littered with mangled bodies, and looked about for something to cling to. The Captain shouted ‘To the boats.’ But there were only two, and they were smashed. The other boats, and practically all the woodwork, had been left ashore. We fired a gun as a distress signal. By this time the ship was almost covered with water. ‘Every man for himself’ and I at once pulled off my boots, coat, and trousers, and over I went. I think I broke all swimming records, trying to put as much space as possible between myself and the ship, being afraid of suction.

“Turning round, the last I saw of the ship, abour fifty yards away, was the after-end sticking upright in the air about one hundred feet. Then it gradually heeled over towards me and sank. Then I swam again to get out of it’s way, thinking the end might hit me as it came down. It cleared me all right. It was all over in about five minutes from the start. When she sank, something blew up, and on came a wave, and round and round I went like a cork. A bouy came speeding by me. I grabbed it, and that was what kept me afloat.”

So violent was the shock of the explosion that it is said to have been felt on board a trawler ten miles away. The Pathfinder was in full sight of the coast when the disaster occurred, and it happened that many people were watching her. From Dunbar the coxswain of the lifeboat saw a huge column of flame and smoke rise suddenly from the doomed ship, and four minutes later the hull disappeared. From Cockburnspath two officers saw dense smoke, and then perceived half of the ship rising straight out of the water.

The watchers gave the alarm and, immediately after the explosion, motor fishing boats, a motor lifeboat, steamers and destroyers hastened to the spot where the Pathfinder had gone down.  As they approached it they found the sea covered with wreckage of the most tragic kind.  For the space of about a mile there were seamen’s jackets, caps, jerseys, boots, letters, photographs, and books, among them the ship’s Bible and order of the daily service.  Some fifty-eight officers and men, among them Captain Leake, were picked up in the water.  Several of them were terribly wounded, and four died on the way to the mainland.

In all there perished in the Pathfinder two hundred and forty-six officers and men.  The first official account stated that the Pathfinder had been blown-up by a mine.  Some days later, in reply to questions in the House of Commons, Mr F.E. Smith said:  “There was reason for suspecting that she had come in contact with a submarine.  The Admiralty were, of course, most anxious that that should not get out to the world, because it might have interfered vitally with the operations to catch and destroy the submarine.”  Subsequently an official German report gave the credit for the feat to U21.  There is thus reason to believe that the Pathfinder was the first victim of a submarine in the whole history of naval warfare.” 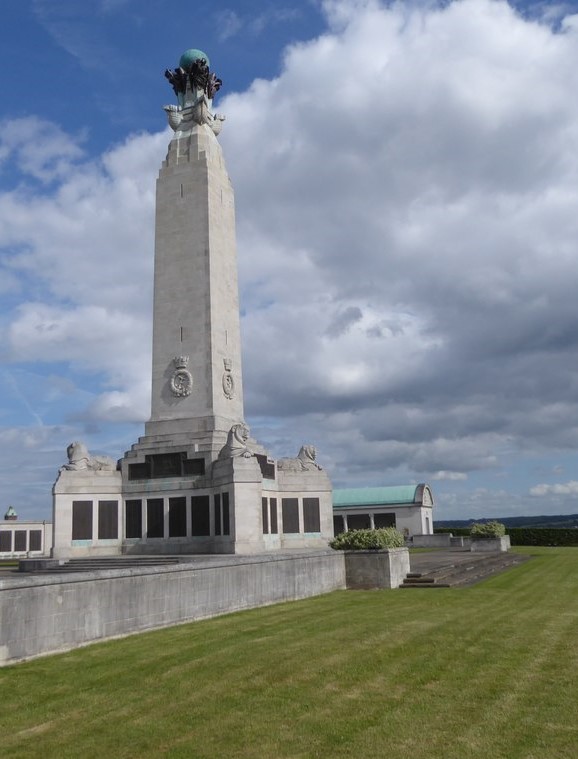 None of this debate would be of any comfort to Ernest who could have been killed outright in the initial explosion.

The British Fleet & the Great War by Archibald Hurd quotes from a survivor who only confirms that Lt Commander Favell was above decks, but quotes him as being the ‘Torpedo Officer’ and suggests that he may have actually spotted the torpedo on its approach.  Certainly that he was in a position to command the engines.One of the survivors of the Pathfinder has stated: —

” About half-past three tea-time was piped, and all the available hands went to their messes. I suppose there were about two hundred men having tea below at the time. I went down to see the meal was going on all right, and after a minute or two went on deck again. I mounted to the top of the hatch about midships on the port side, and was just commencing to speak to Mr. Morrison, gunner, when the chief boatswain’s mate shouted, ‘ There’s a submarine away there on the star- board quarter.’ Mr. Morrison just saw her periscope, but before I could see it it had either disappeared in the trough of the sea or the vessel had sunk. I believe the torpedo-officer (Lieutenant-Commander E. T. Favell) also saw it, for in an instant he gave the orders to ‘ Full steam ahead starboard,’ and ‘ Full speed astern port,’ and just after a gun was fired. It all occurred in a few seconds, and while I was still standing with Mr. Morrison the ship shook, and there was a rumbling sound from her bottom on the starboard side, just opposite to where we were. At the same time both engines were stopped, and this I found was by the order of Mr. Favell, who, no doubt, saw the torpedo coming.”