Leonard Arthur Favell of the 1st Kings Dragoon Guards, was my Great Uncle, the Brother of my Grandfather.  Information from the Commonwealth War Graves Commission was that Leonard Arthur Favell, Trooper 4396237 of the 1st King’s Dragoon Guards, Royal Armoured Corps died on Thursday the 22nd June 1944 while serving in Italy.  His grave is in the Assisi War Cemetery.  I was always told that Len died when an armoured car he was riding in went over a landmine.  Nothing else was really known.  Little did I imagine that one day I would be able to talk to someone who was actually with him on that fateful day.

Len was born in 1914 and when he enlisted on 1st May 1940 he would have been 25 years old.  His address was 100A Kentish Town  Road, London NW%.  His occupation was Jeweller.  He was posted to The Green Howards a Yorkshire Regiment and sent initially to Ripon and then on to Redcar for conversion training to become part of the Royal Armoured Corps. 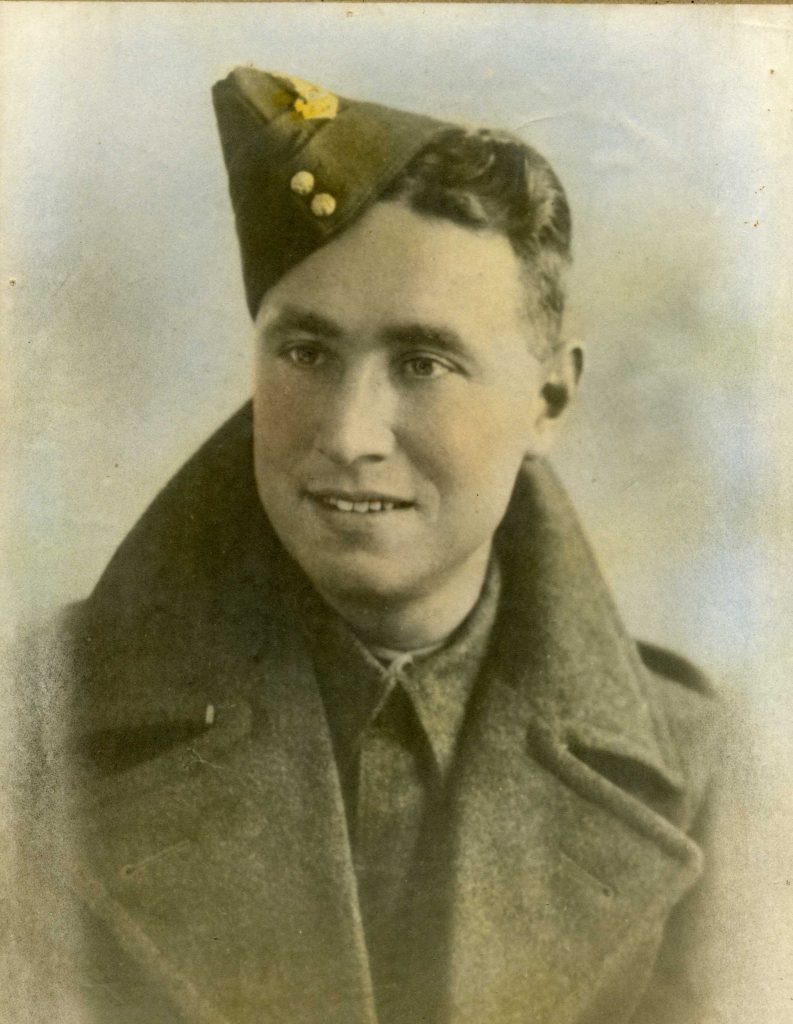 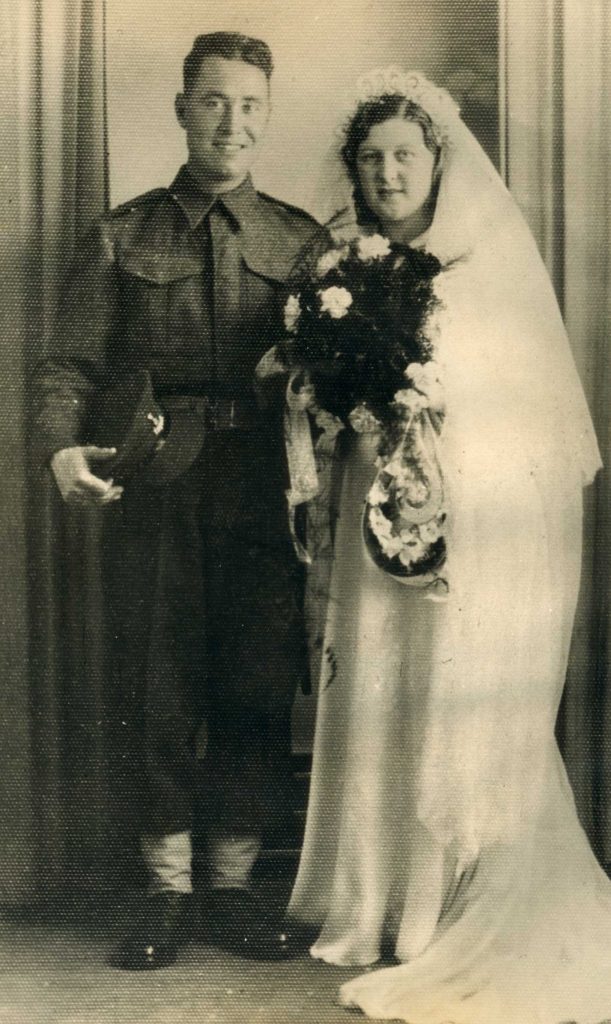 On the 19th October 1940 while on leave Len married Dorothy Bessie Marion Bendall.  Dorothy was living at 19 Charrington Street London NW1.  Len remained based in Yorkshire undergoing further training and in July 1942 his Battalion was transferred to The Royal Armoured corps (RAC), becoming the 161st Regiment.  Len undertook training courses in Wireless/ Gunnery and passed the standard test for a Gunner Operator.  In 1943 has was posted to the 59th a Reconnaissance (RECCE) Regiment of the RAC. Christmas cards that Len sent home to his mother Hannah in 1942 and 1943 were from the ‘Green Howard’s Support Battalion’  On the 13th December 1943 he embarked for North Africa.  He must of been aware of where he was headed as he apparently promised my Father who was 8 at the time that he would bring him back camel.  By this time the Allies had already invaded Italy, landing in September 1943, having first invaded Sicily from North Africa.  The 161st (Green Howards) Reconnaissance Regiment never went into action as a regiment itself, but supplied reinforcements.  This is possibly how, on 29th April 1944 Len found himself posted to the King’s Dragoon Guards. 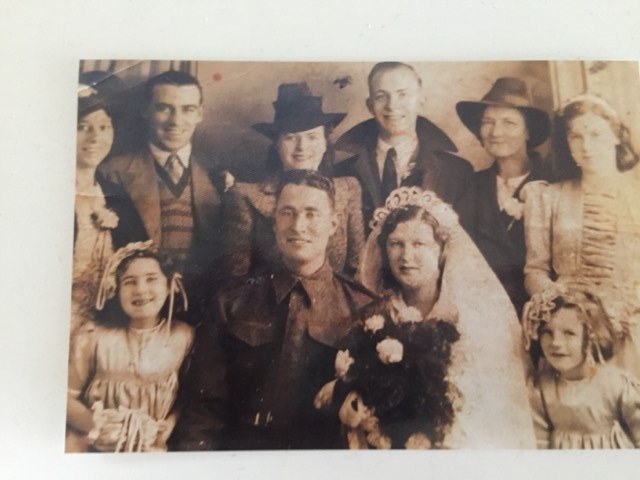 After landing on the beaches at Salerno the allied armies endured a long and protracted fight up the mountainous spine of southern Italy.  The German defenders fell back to a fortified and well defended line that cut across the country and centred on Monte Cassino.  Between January and March 1944 there were four battles of Monte Cassino before the ‘Gustav’ line as it was known was finally broken and the allies made for Rome which eventually fell on the 4th June, just two days before D Day.  There was heavy fighting in the areas around Perugia and Assisi where Len is buried and the Allies suffered a high number of casualties while facing crack regiments of German troops.

The fighting in Italy was slow progress in the hills and mountains, clearing each village and vantage point before proceeding.  The German troops fought for every inch and when they fell back under the cover of darkness often left mines and booby traps for the advancing allies. Tanks and other armour often had to be separated from the infantry due to the torturous mountain roads and supplies were often brought in by mule train.  The Dragoon Guards were a reconnaissance outfit and would be attached to advancing corps as needed.  As such they were inevitably first on any scene and usually took the full brunt of resistance from the Germans who were slowly falling back.  The nickname of ‘The D Day Dodgers’ given to the forces fighting in Italy was undeserved. 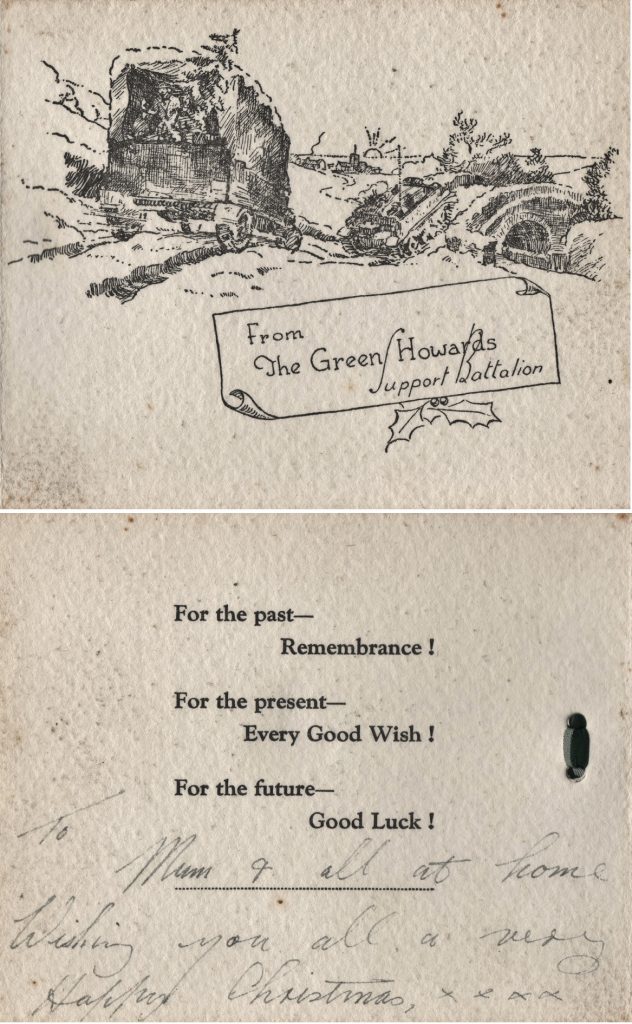 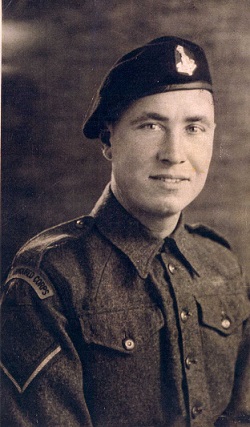 It was not only the terrain that the troops had to contend with, but Italian winters were harsh and heavy rain and swollen rivers made progress more difficult.  In a letter home Len described it as “hard going alright….mostly on foot too, we don’t have a lot of chance to use our armoured cars….I have met a couple of my pals since I have been here and there are a couple of them with me….I have never been in so many different houses in my life since I have been here, some queer places too, of course we sleep in the open a lot too , but we are on the move all the while slowly but surely if you know what I mean”

The letter, to his brother Sidney, was dated the 25th May 1944, just 4 weeks before he was killed.  His return address is given as “D Squadron, 1st Kings Dragoon Guards, CMF.”  (Central Mediterranean Force)  On the 22nd June, the day Len died, the Kings Dragoon Guards were in action near Monte Buono directly overlooking Lake Trasimene.  There was fierce fighting and many German counter attacks in the area.

An article entitled “A British soldier remembers” by Ronald Arthur Tee, describes the authors own experiences advancing through Italy as part of a reconnaissance corp.  The operations described tally with Len’s descriptions in his letter and I quote here.

“  Another town, similar situation. We were supposed to find out if the Germans still occupied it or not. Now this town was on a very, very steep high hill and the road up to it was very, very steep. I mean REALLY steep.  In fact, it was so steep that the road wound from left to right to left to right to make the grade.   I was in the lead car as usual and I noticed that every time we made a sharp right hand turn our vehicles were exposed to the town. After moving up this road for a while, I began to think that maybe the German’s had left the town because nobody was opening fire on us. Anyway, I was taking my time because I was walking in front of my car looking for land mines. I found about twelve of them on the way up, all buried in the road. I dug them up and threw them in the ditch. All this time, coming through on my radio from the Commanding Officer way down below, was – “What’s    happening?”, … “Push on!”, … “Push on!”, … “There’s nobody in that       town!”, … “Nobody is in there!”, … “Push on!”  Well, they all think that they’re the bosses. There was only one boss here, and that was me, …. and I was going to do it my way! So slowly we made our way up the hill with all the rest of the squadron behind us in different positions. When we got to the very last bend in the road, which we knew would take us into the village, I went up a hill in the long grass, …. peered over the top, and sure enough, …. there before my very eyes was the entrance to the town and right alongside the road was a very large 88mm anti-tank gun “ 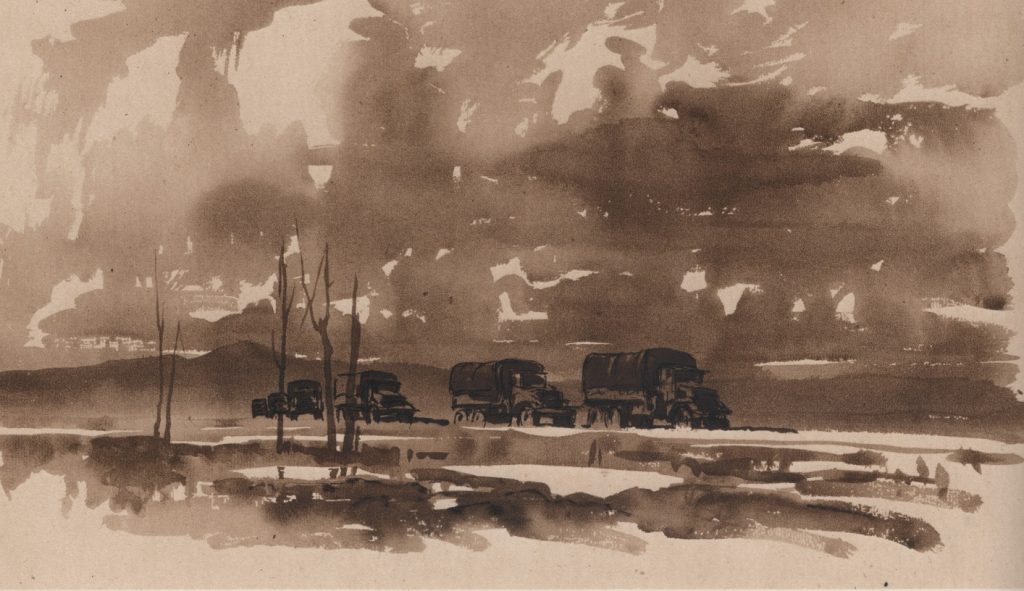 Mines were a constant hazard to the advancing troops and armoured cars were particularly vulnerable so this is quite probable.  Quoting again from “A British soldier remembers”

“…I was trailing along in the rear.  The lead Commander went through a cross road that was heavily mined.  He didn’t spot them but was lucky enough not to set any off.  The second car, a heavy, hit a mine, turned right over and hit another.  Three killed and one badly injured,”

In 2014 I was contacted via the web site by Tracey Beevers who’s Father Walter Beevers had served with Len in Italy.  She arranged a telephone call between us and said that “Dad is keen to tell you what he knows. He has wanted to make some sort of connection for years. It is the one thing he still gets upset about from the war years – i.e. that he hasn’t been able to pass any information on from that day.  How amazing really that as much as dad has been wanting to tell someone – someone else was wanting to find out.”

We were in Italy.  I was in a Dingo Scout Car, one of the small two man jobs.  We came to a cross roads, turned right and had gone about 100 yards when a Trooper came down and said ‘Len Favell’s got it’ and I said is he dead?  He said no, but he’s in a bad way.  We couldn’t go down as they were bottled up in a little village with shooting and that going on.  My Squadron Leader (Delmage) told me to put the seats down as low as they would go and said to “go down the hill as fast as you f’ing like!  He was a middle aged squadron leader and must have had faith in me, as I was only about 18 at the time.  On the way back I went back up the hill like a bat out of hell, back to the squadron.  I was told to get the ambulance and to go back for him and get him to the hospital.  I was expecting a dreadful trip back as I was expecting we would be fired on all the way, but some of our big guns had turned up and the Germans saw them and were gone.  We went to the nearest town where there was a hospital but they wouldn’t let us go in with him, we were turned away and had to leave him there.  On the way in the ambulance he was trying to talk to me all the way, he was talking to me about his wife and what he wanted me to tell her but it was difficult to work out what he was saying.  We went back to the squadron and then heard he had died a couple of hours later.  He lived in London and I lived in Halifax.  After the war I always meant to find his wife and tell her, but time goes on and it was not easy to find people then. 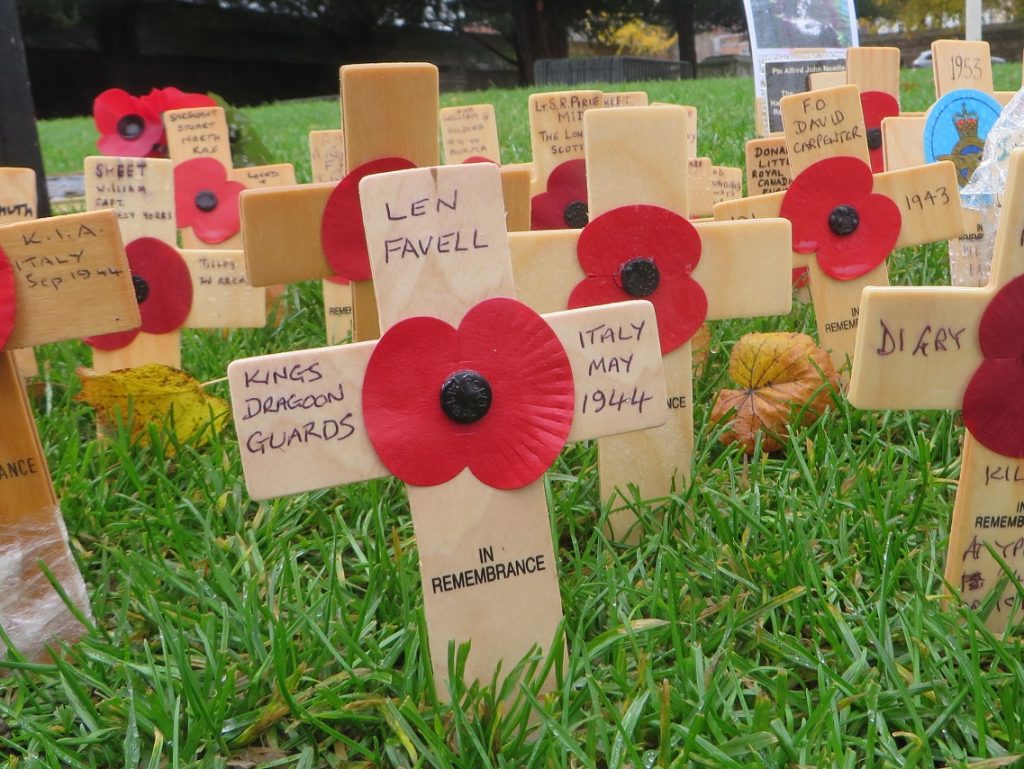 Len is buried in the Commonwealth War Graves Cemetery in Assisi, Italy.

Thanks also to Sandie Donovan, daughter of Len’s wife Dorothy, for the group wedding photo and for the original copy of their wedding certificate.