Among the records of service during the Napoleonic period, Favells can be found both in the regular army units that were fighting on the Continent and the Militia Volunteers and ‘conscripts’ at Home ready to repel a feared invasion.

In the early 1800’s there was great concern that England would be invaded by France.  In 1803, after a short armistice, Britain and France were once again at war.  The defence of England against Napoleon Bonaparte’s army that was gathering across the channel in preparation for invasion prompted new measures.  Volunteer units were raised and further Militia units would be raised by ballot.  Personal circumstances would be taken into consideration to classify men into 4 groups of eligibility for service.

Those selected for service were allowed to put forward a substitute.  Many preferred to Volunteer rather than be balloted into units not of their own choosing.  The records of Volunteers for National Defence 1803 for the Barford Hundred of Bedfordshire, list under Wilden: – 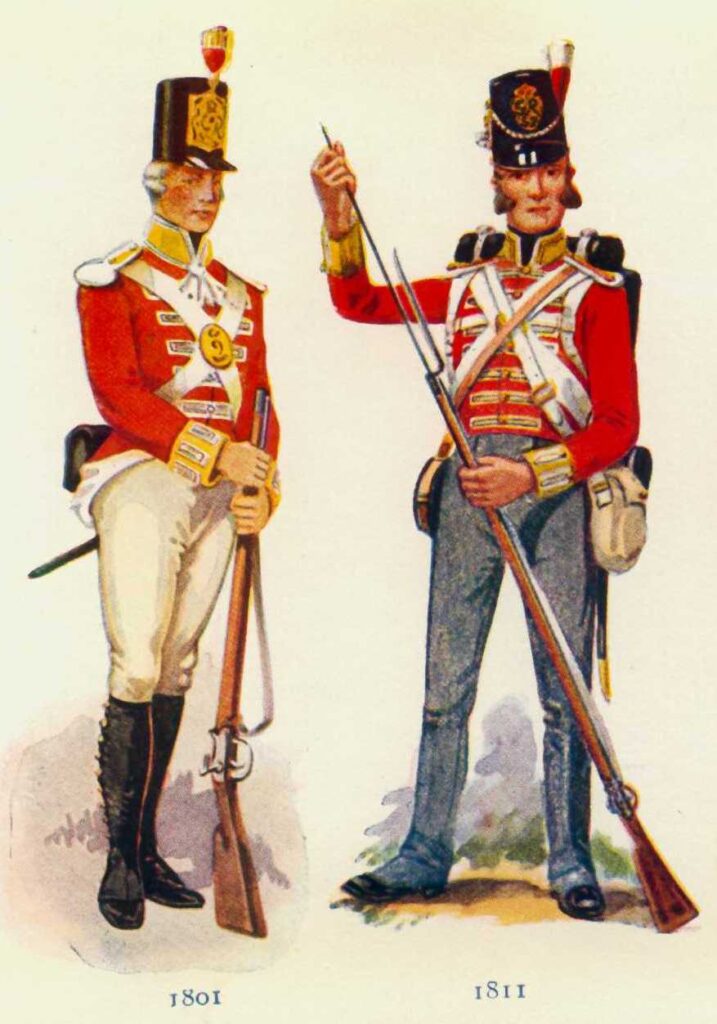 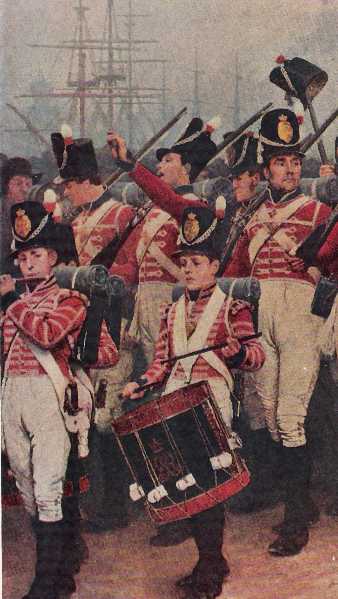 Surveys were also made, recording horses, carts, wagons and drivers that would be available in time of need.  Bedfordshire records of the National Defence Lists 1803, covering transport Teams, Millers and Bakers, (presumably needed to support an army) shows the following: –

The Gentleman’s Magazine of November 1840 carries a report regarding the death of a Mrs Favell of Cambridge and reveals the exploits of some of her sons during the Napoleonic period.

Lately.  At Cambridge, aged 93, Mrs Favell.  She was the mother of sixteen children, seven of whom died in infancy.  Five of her sons devoted the best part of their lives to the service of their country; three of them fell in action, viz. Capt. John Favell, at the battle of Leyden, in the Duke of York’s expedition in Holland :  Captain Samuel Favell, at the battle of Salamanca, during the Duke of Wellington’s memorable campaign in the Peninsula ; and Wm. Anthony Favell, in the battle of Toulouse.  Lieut. James Favell, R.N. died whilst engaged in a government expedition to survey the shores of Africa ; Capt. Thomas Favell, R.N. was many, years in active service at sea and in several engagements.  When the national rejoicings took place upon the declaration of peace, in 1815, Mrs. Favell displayed alike her patriotic and maternal feelings in a transparency inscribed—” I rejoice for my country, but mourn for my sons.”

The fact that these men were officers rather than rank and file privates indicates that they were not the same social class as the farmers who volunteered for the Militia and would would needed a certain amount of wealth to purchase their commissions. 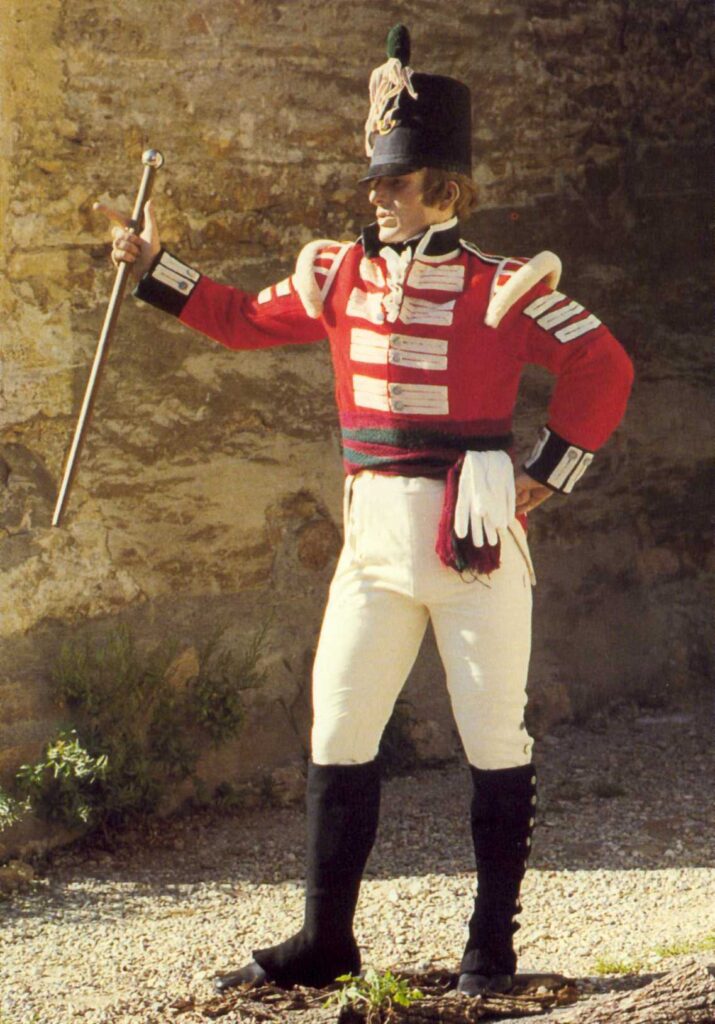 The Peninsular campaign of  1808 – 1814 to drive Napoleon’s French army from Spain and Portugal was conducted under the leadership of the Duke of Wellington.  Casualty lists show Captain Samuel Favell died of wounds at Salamanca on 22nd July 1812.  Ensign, William Anthony Favell was wounded at Toulouse 10th April 1814 and died as a result on the 24th July.

Commissions had to be purchased and although officers were usually the sons of country gentry and the like, with some private incomes, they were not necessarily very rich.   An Officer’s investment in their commission could be realised be reselling at any time, but if he did so the interest that had accumulated against his sum invested would be forfeited.  The pay was not great, with an Ensign (Sub Lieutenant) receiving around £75 per annum after deduction of regimental expenses and income tax.

Both officers were part of Wellington’s army that spent six years marching over 6,000 miles around France and Spain campaigning undefeated against Napoleon.  Wellington was later to remark that he “could have done anything with that army. It was in such perfect order”.

The battle of Salamanca in Spain, where Captain Samuel Favell died, was hard fought with attacks and counter-attacks resulting in the decimation of several French regiments in the face of withering musket volleys from British and Portuguese formations.  One French regiment lost 1,031 of its 1,449 men.

Captain Favell’s death and a preceding incident are recorded in a work published in 1823, entitled ‘A narrative of the adventures of Samuel Wray now living at Kempston, Bedfordshire, from the time of his volunteering for that parish in 1796, till his return to England in 1815’.  We formed close column on a large hill.  As we stood in close column, a ball took off the arms of a private in our regiment, who received a perfect cure and was sent home a sergeant, and singular to relate he was the only person wounded.  We moved further around the hill, and it being a very hot day two or three of our men went for water.  Captain Favell of my own company met them and took their canteens from them.  He threw the water away and took the men to the Colonel and petitioned to have them flogged; but he told him he would not have them punished, for we should have something else to do.  In a few minutes we were wheeled round the hill, and the French fired at us.  We had to get over stone walls till we got upon a level.  The French were upon the hills, and we commenced firing.  The first thing we observed was that Captain Favell was shot through the body.  He walked by us, and the men said ‘you cannot get us flogged now.’  The Captain died that night. 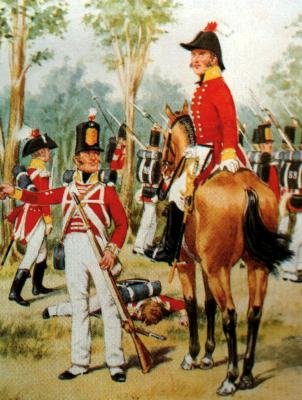 The battle of Toulouse on the 10th April 1814, was the last of the campaign and tragically need never have taken place.  The cost to Wellingtons’ army was some 4,558 casualties with the French defenders of the walled military supply town losing 3,236 men.  The following day Wellington received news of Napoleon’s abdication that had taken place on April 6th, four days before the battle.  In final defiance the French for some unknown reason launched a further final attack on April 14th, either in ignorance of the situation, or out of spite, causing around 800 further casualties to each side.  Ensign William Anthony Favell, who had been wounded on the 10th April, died of his wounds just over 3 months later. No doubt he had cursed his luck having survived six years of hardship and battle only to be fatally wounded in the last action of the war, even that taking place after the original objective had been achieved.

Wills or probate records for both Samuel and William were subject to some form of administration as late as 1854 and details are recorded under the court of the Archdeacon of Ely and copies held at Cambridge University library.  Transcribed index details refer to both as being formerly of the 61st regiment of foot and describe them as bachelors of Cambridge.

All that is known of this Samuel is that his Waterloo medal was recently donated, as part of a larger medal collection, to the Liddel Hart centre for Military Archives at Kings College London.  The 79th played an active part in the battle of Waterloo, resisting French cavalry charges with solid, disciplined infantry squares.  It is presumed that, like all the other Favells so far traced, that Samuel was an Englishman, but more research will be needed to establish where he originated.

“The Armies of Britain” by Michael Barthorp describes the men of Wellington’s army of the time: –

“Ultimately the system and the tactics, the victories, sieges, advances and retreats depended above all on the quality of the regiments of the line, in their battered shakos, faded red jackets and ragged trousers, weighed down by knapsack, pouch and musket, marching, fighting and enduring across blazing Sierras, snow-covered mountains and flea ridden villages.  The years of campaigning welded together a collection of regiments into a powerful cohesive force, with a spirited aggressive and self-confident character all of its own.  An arduous, open air life and shared dangers narrowed the division between the ranks; on the one hand the officers, sons of the gentry and professional classes, boys just out of school, ageing captains too poor to buy their promotion, off-spring of rich tradesmen, quarrelsome squireens, and proud Highland gentlemen; on the other the rank and file, ploughboys, gaolbirds, riotous Irish, well set-up militiamen, out of work weavers, pale-faced youths from the new slums, most of them illiterate but a surprising number with some education, and almost all with a bottomless capacity for drink;  between the two, the real professionals, the sergeants, hard, tough and experienced, guiding the young officers and ever watchful of the men.” 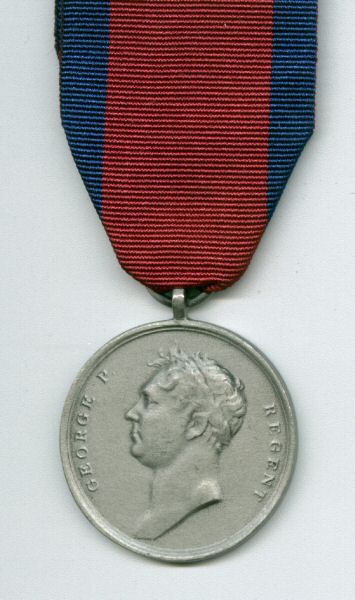