Second Lieutenant 4th Battalion, York and Lancaster Regiment.
William was the son of son of Richard and Ada Favell of Sheffield. The 4th (Hallamshire) Battalion was a Territorial force and was raised in Sheffield and allocated to the 3rd (West Riding) brigade in the West Riding Division.  They were landed in Boulogne on the 14th April 1915 and the formation became 148th Brigade, 49th Division on 12th May 1915.

When William signed his Attestation papers on December 8th 1914, declaring his willingness to serve, he was not in the UK, but Canada.  His Canadian Attestation gives his occupation as Rancher and suggests he was destined to join a Canadian Mounted Regiment, the British Columbia Horse.  His date of birth is given as June 18th 1885 and his Father is listed as Richard Favell, Belmont house, Sheffield.  However, rather than joining the Canadian forces, William decided to travel back to England and joined the York & Lancaster Regiment.  His brother Richard Vernon Favell was also serving as a Captain in the Royal Medical Corps.

The London Gazette lists William Reginald Favell of the 4th (Hallamshire) Battalion, The York and Lancaster Regiment, to be 2nd Lieutenant, as from the 4th July 1915.  Then on 19th October the Gazette announces 2nd Lt William R Favell of the York and Lancaster Regiment to be temporary Lieutenant, dated 4th October, closely followed by relinquishment of the temporary rank on alteration of posting dated 21st October 1915. 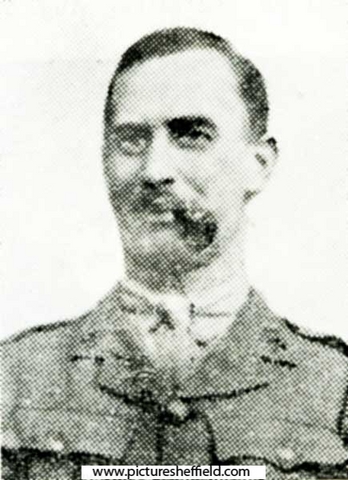 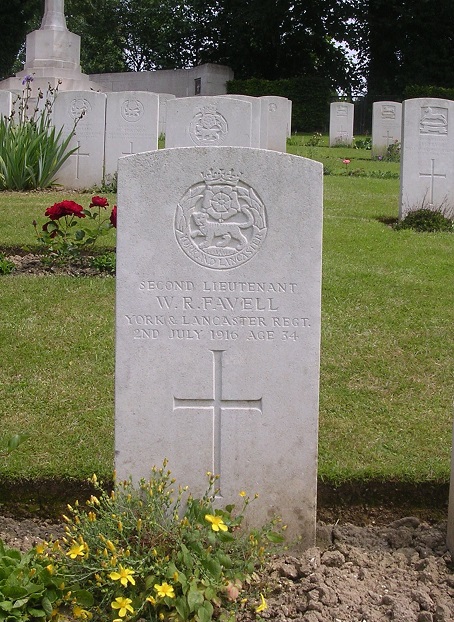 William died on Sunday, 2nd July 1916.  The CWG records his age as 34, but calculated from his date of birth he would actually have been 31 years old. ‘Officers Died in the Great War’ confirms his regiment, rank and date of death and indicates that he was ‘Killed in Action’ He is buried in the Authuile Military Cemetery, in the Somme, France.

The village was held by British troops from the summer of 1915 to March, 1918, when it was captured in the German Offensive on the Somme; it was ruined by shell fire even before that date.

The Military Cemetery was used by Field Ambulances and fighting units from August, 1915 to December, 1916, and in 1917 and 1918 by Indian Labour Companies.  The cemetery is on ground that slopes down and overlooks a small branch of the River Ancre.

William’s death was reported in the Sheffield local press under the headline “Two Doctor’s Sons”: – The sons of two Sheffield Doctors were in the great British move forward and one, 2nd Lieutenant Richard Vernon Favell was killed, while the other, Captain H L Willey, was wounded.  Lieutentant Favell, who was in the York & Lancasters, was the son of Mr Richard Favell of Brunswick House, Glossop Road, Sheffield.  He was 33 years of age and was educated at Oakham School.  He was in British Columbia when war broke out.  He had been in the Canadian Rifles, but seeing that England needed all the help she could get, he came to this country and joined a local battalion of the York & Lancasters.  He was the second son of Mr Richard Favell.  The elder son Captain V Favell is in the RAMC and serving with the West Riding Field Artillery at the front.